This is quick tip for users of the Netgear DG834G wifi router. While the wifi range is adequate, I found it marginal when used together with a MacBook Pro. It kept dropping the wifi connection, while other machines (a HP laptop, Nintendo Wii, iPhone) were perfectly happy. I suspect that Apple's decision to put a wifi antenna inside a (beautiful) metal box was not the most inspired engineering decision ever...

The solution to this problem was trivial: change the aerial. The DG834G comes with a screw-on aerial. The supplied aerial is omnidirectional (in other words: the radio signal covers roughly a globe centered on the aerial). I purchased a new aerial with a far higher gain - this means that the radio signal now forms a flattened doughnut shape. This works for me as our house is deep and narrow; I simply twisted the antenna around until it covered the whole house.

The result is excellent, the Mac now holds the wifi signal without ever dropping.

Here is a photo of the router, the new aerial is the black one, for comparison purposes I have put the original aerial in front of it: 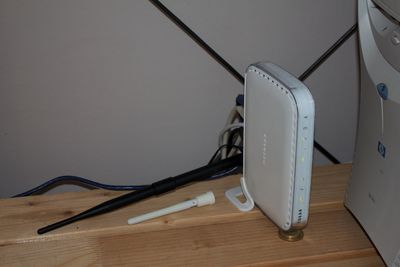 A note of caution: from v4 onwards, Netgear decided to make the antenna non-removable, so check first before buying an aerial.